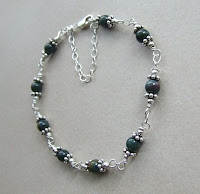 So much has been written about using drystals and stones in healing and in protection,I could never begin to do the topic justice her.Originally, I planned to refer to a recent Coast To Coast program with a renowned expert on the matter.In the process of looking for Bloodstone to which she refers,I found a wonderful artist designer on Etsy who incorporates in the description of her beautiful pieces something about beliefs associated,For example of the bloodstone bracelet which was chosen for this post she says:
"You are probably familiar with Aquamarine, the well known birthstone for March. However, the traditional birthstone for the month of March is bloodstone; and many cultures around the world still recognize it as such. Rooted in history, it has been treasured by ancient civilizations for centuries, including the early Christian church; as bloodstone is said to represent the blood of Jesus Christ. In Ayurvedic healing & astrology, bloodstone is considered a medicine as well as an aphrodisiac."

You will probably want to check out her shop,Some of her pieces are in the video, but it is well worth a visit to browse and read some of the details presented.
http://heavenlyflower.etsy.com

From the program mentioned:
"Healing Stones:

In the first hour, expert on energy healing, Shelley Kaehr talked about the power of gems and minerals. According to Kaehr, certain stones can shift the vibrational frequency of a person's body to create healing. She recounted the story of man who used a bloodstone to help cure a serious lung condition. Kaehr thinks the chlorite in the bloodstone may be at least partially responsible for its healing properties, but also admitted there could be a more metaphysical reason for why and how it works."

If you have experiences to share feel free to leave them or Email to nursesnaturally@gmail.com
Posted by UniqueNurseGranny at 10:35 AM

Wonderful write up & video. Thank you for the feature, I am so honoured.

I love your work and the descriptions.Glad to have found you on Etsy. 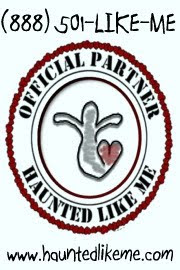 UniqueNurseGranny
Raleigh, Southeastern, United States
A retired clinical specialist/teacher in Psychiatric Nursing who now makes jewelry,watches,etches glass and reads constantly. Always interested in ESP and paranormal studies and research,I had the opportunity to work with Dr Ian Stevenson at UVA and knew Dr JB Rhine at Duke many years ago.